And this one really is new--as in "never before owned or fired by anyone else".

I can't remember the last time I bought a brand new gun. I think that it might have been back in the 1980's. I bought three new guns back then, and I still have them. Other than those, since my tastes run to historic arms, every gun I've ever bought has been used.

But then I stumbled across this one--an older First Generation Glock 22 in caliber .40 S&W that was initially delivered to the Detroit Police Department back when that department used Glocks. (They now use the Smith and Wesson M&P .40.) 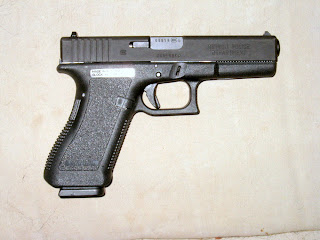 This one was never handed out to an officer and when Detroit switched, they traded this one in or otherwise disposed of it, along with the rest of a small batch of never-issued Glocks. I got this one, and my friend Aaron over the The Shekel got one, too. In fact, our guns have consecutive serial numbers.

After giving it a virtually unnecessary cleaning and basic lubrication, I took it out to break it in today. Like many police-issue handguns, this one has the heavy New York 1 trigger that Glock installs at the request of agencies who fear liability more than they do poor accuracy. Granted, Mas Ayoob shoots his Glock 22 with the NY trigger in competition, basically just to prove that it can be done and done well with enough practice, but I like light, crisp triggers such as the ones on my H&K P7's or my 1911, so I will be switching out this pistol's connector out for one of the excellent 3.5lb. connectors made by Lone Wolf Distributors.

But shooting it today, I was pleased to see that it kept every round fired on the paper plate targets. The sight picture is excellent, as is the norm with Glock sights, and I actually found myself liking the longer sight radius of this full-sized pistol, which was noticeably different from the compact Glocks that I'm used to shooting. It sits in my hand nice, points well, goes "BANG!" every time and has the Detroit Police Department's property stamp prominently rolled into the slide. 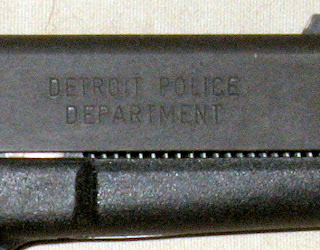 What's not to like? And the best part is that it fits the same holsters that I already have for my other Glocks, so I don't need to run out and buy new stuff for it. I even had a number of Glock 22 15-round magazines in storage, so I didn't even have to buy any of those.

One thing that did irk me though. The dealer that we got these from sold them with two magazines (also each marked "DPD") but on the Glock tupperware box that the pistol came from the factory in, the label clearly indicated that it had left said factory with one Glock pistol and THREE magazines. Obviously, either the dealer or they City of Detroit held one back--a minor sore point, but a sore point nonetheless.

Still, it's a nice pistol that came at a fair (but not fantastic) price, and besides being a totally serviceable sidearm that I can shoot for recreation or rely on for self-defense, it fits into my collection of police guns quite well. I'm sure that it will become fast friends with my District of Columbia-marked Glock 19. 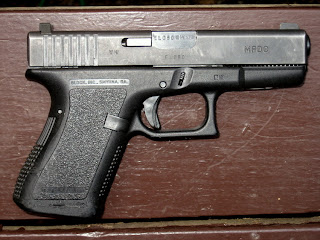 I keep trying to tell people that I'm not a Glockaholic...I just happen to own a few. Don't think less of me because of it.

EDITED: After reading this article by Mas Ayoob about the Glock with the NY1 trigger, I think I'll keep mine stock, at least for a little while. We'll see how it goes.
Posted by Murphy's Law at 1:23 PM