Aim Fast Hit Fast course a must for serious gunnies

Blogging was light this past week-end because I, along with Aaron of The Shekel, were in Wilmington, Ohio Saturday and Sunday taking the Aim Fast Hit Fast class from Todd Green.

Class Description: Aim Fast, Hit Fast is intended to pick up where most marksmanship training ends. All shooting involves a balance between accuracy and speed. Off the practice range, a shooter does not get to choose how much time he will get to break a shot … shooting becomes reactive and speed is determined by the situation rather than comfort or habit. The goal of this class is twofold. First, to understand the critical balance between accuracy and speed for each individual shooter. Second, to improve each shooter’s ability to deliver accurate, rapid fire in shorter timeframes to maximize his effectiveness shooting a pistol under stress. Skills to be covered include marksmanship, presentation from the holster, reloads, multiple targets, and shooting on the move.

Instructor: Todd Louis Green has worked in the firearms industry since 1998, including instructing for the NRA Range, Beretta, and SIG-Sauer. He has over 1,000 hours of firearms and combatives training from such prestigious trainers as Ken Hackathorn, Ernest Langdon, Larry Vickers, SIG Academy, and Blackwater. A 3-time “Advanced” rated shooter at Rogers Shooting School, Todd is also a graduate of the NRA Tactical Pistol Instructor Development program and a 3 division Master-ranked IDPA competitor. Todd is a certified SIGARMS, Beretta, and Glock armorer; certified Simunition force-on-force instructor; and certified Emergency First Responder. He is also a long time member of IALEFI, IDPA, and USPSA.

First of all, massive kudos to Aaron, who kicked ass on the four F.A.S.T. drills during the class. He was smooth, fast and on-target with his Smith and Wesson M&P all week-end and he smoked me on all four of those drills, shooting three of the four completely clean (no misses).

The class consisted of much shooting. I think that we burned through a thousand rounds or maybe a bit more during the two days of shooting. This is not one of those classes where you sit around and listen to the instructor tell war stories or otherwise lecture you for hours. You shoot here, and you shoot a lot, and with the relatively small class broken down into two relays, it seems as if Todd is always watching you or standing next to you offering advice or helpful critiques. And the man knows his stuff. Everything that you're going to do, he does first, and his control of his pistol and his speed is something to see. Then he has you do it while he watches and troubleshoots your technique. The course was all about increasing shooter speed and accuracy, both of which depend in large part on a lot of small but important fundamentals and body mechanics. All of the shooting was done close-in, from three to seven yards, and the emphasis was on honing shooter skills to allow fast, precise repeatable hits on small target zones, with lots of reloading drills and some movement added. It's not a class for the novice, because you're expected to come in with some skills already lest you hold the rest of the class back, but it'll definitely help experienced shooters pick up both speed and accuracy and give you quite a few new tools to put in your skillset toolbox. I know that I learned some really good things this week-end, and that was despite me sucking up my own scores by repeatedly switching handguns the first day (don't do this) before settling on my Beretta 92F, which, truth be told, I only brought along on a whim, packing it at the last minute because I'd noticed in his CV that Todd used to shoot for Beretta and I'd hoped that he could give me a few tips and pointers on this pistol which I'd only bought due to it's personal history and which, until this course, I had only used as a test platform for my 9mm reloads. 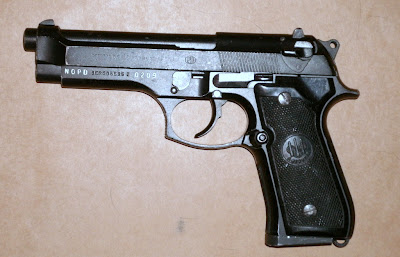 It's safe to say that I was never a fan of the Beretta 92 before, but after this class, my under-appreciated 92 is going to get some new magazines and a decent holster set-up.

But the lesson that I re-learned (because I really do know better) is bring one pistol that you're familiar with and current on, and don't mess with your tried-and-true carry set-up during a timed course; if you've always carried a particular firearm and worn a rig a particular way, making even small changes right before a speed drill is a bad idea. Again, I know better. But sometimes some of us apparently have to re-learn basic concepts the hard way. Ah, well...

That aside, I found the course to be very educational and the new techniques and tactics that I was exposed to were well worth the cost of the course and the trip to Wilmington, and it was even worth spending two nights in a hotel room with Aaron and his array of high-tech gadgets (I think that he said that it was a blackberry, or a blueberry or a strawberry...some kind of berry) that started to make beeping noises in the early hours of the morning, starting about two hours or so before we were supposed to wake up and repeating every twenty to thirty minutes or so, re-awakening me every time I'd managed to get back to sleep. Whatever that thing is, I suspect that it's related to Aarons's infernal GPS that routinely misdirects him (and me when I foolishly rely on him for directions) yet still has his unshakable trust for some reason. Did I mention lately that I'm allergic to anything more modern than an eight-track cassette player? Skynet's not gonna get MY ass, and I am not fond of going out into the black without an actual honest-to-God paper MAP that shows me all the roads, not just the solitary one that some electronic idiotbox decides to tell me about.

OK...deep breath. HAL 9000 is gone and I'm safely back in my own little low-tech world where I, not some device purchased at Best Buy, set my agenda and determine my fate. Life is good again. And Murphy was quite happy to see me even though I'm sure that he had more than a bit of fun being spoiled by my super-cool neighbors who watched him in the Lair all week-end.

Oh--and all you people in Ohio...that left lane on the highway is a passing lane. When you're in it, you're expected to pass the vehicles in the right lane, not drive along next to them with all those people from smarter states stacking up on your back bumper. Just saying.

Now back on track, if you're interested in taking this course--and I recommend it if you've already got some solid shooting skills and you want to improve them--you can find out more about Todd's upcoming class schedule and read reviews of his previous classes here. I went in as as open-minded skeptic, not knowing anything about Todd or his class except for the fact that Aaron chose it after reading about it on Tam's blog. I think that I told him more than once that "if this sucks, I'm gonna be pissed." But it did not suck. And by the first break on the first day of the class, I knew that we were into some good training. So Aaron (and Tam)...Thank you. And Todd...great class. I look forward to shooting it again. This time with just one pistol. Or maybe two.
Posted by Murphy's Law at 7:09 AM