And her name shall be Merida

Sorry for the lack of posting. Been busy here. But little Merida is fitting right in. And that will be her name now, named for the capital city in Mexico's Yucatan state, a beautiful place that I would never have gone to on my own, but once I saw it, I fell in love with it. And that applies to this crazy little 3/4 Pit Bull too. I didn't want another dog and wouldn't have chosen a pibbie but now that I've started to get to know her... 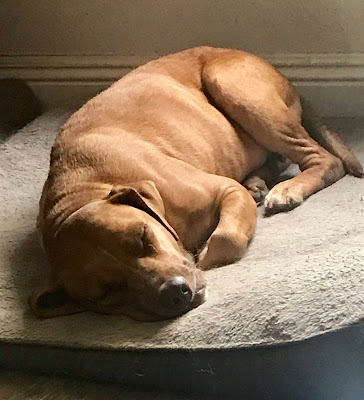 Here she is on one of the two dog beds by the window. She has no problem competing for this prime space with the other two, meaning one of the Shepherds has to sleep elsewhere. But they let her. She's now chasing them around, trying to be everywhere they they are and licking at their faces whenever she can, kind of like that annoying little sibling they wish would go away but who adores them so much. And they put up with all of it, although Murphy does get agitated at times. I think even he's come along though. She's got this sunny disposition that you just can't get mad at. Despite everything that's happened to her, she's downright cheerful. 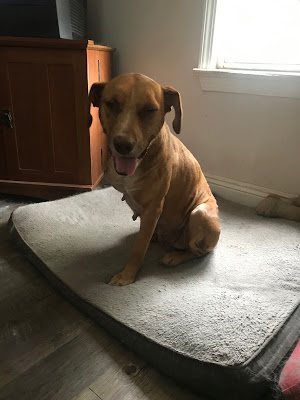 Yesterday she was outside with me and the other two, and suddenly, like they'd coordinated it all three ran to the back door wanting to get in the house. 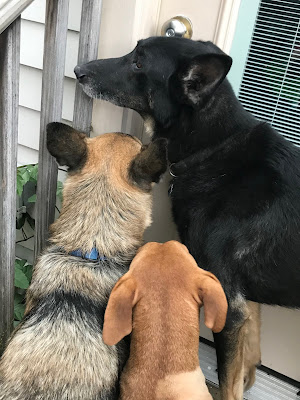 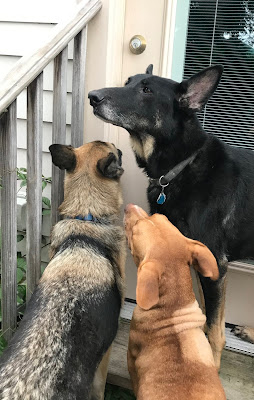 So I got up from my lawn chair where I'd been sitting and went over to let them in. I knew that rain was coming but within thirty seconds of us all going inside, a deluge hit and it poured like crazy. They felt it--all three of them. And then they all looked at me smugly when we were inside and they were lying down on their nice dry dog beds as the rain beat on the windows and roof. "Good thing hooman listen to us!"
Posted by Murphy's Law at 9:15 AM