David Olofson's off to jail, and the sun's shining brightly on GOA's lies.

For months now, we in the shooting community have been bombarded with Gun Owners of America propaganda about a guy in Wisconsin named David Olofson who allegedly wound up in federal court because an AR-15 rifle that he loaned to someone "malfunctioned" and fired three rounds before jamming. The story's been bouncing all over the internet, usually on websites dominated by faux patriots and Walter Mitty warriors--the teens and fat guys who can't hack the military but who nonetheless sit around telling each other how they'll rise up and kill lots of police officers and federal BATFE agents "when the day comes". They can be found in large numbers on websites with names like AR15.com, Uzitalk, Falfiles, and a few others. Frankly, it's because of oxygen-wasters like them that I don't subscribe to any of those sites despite the fact that there is sometimes useful information posted to them by other, better people.

The story also appears to stem from Gun Owners of America, and GOA is renowned as the nation's largest fake gun group. It's a scam that basically tricks well-intentioned gun owners into giving large chunks of their money to GOA by exaggerating or just plain making up stories of government abuse of gun owners, and the money goes for little other than supporting the lifestyle of owner Larry Pratt and his kin, many of whom are also on GOA's payroll. The Pratts do nothing more than spam out e-mails and faxes about how the sky is about to fall on gun owners and then they ask for money, claiming that they can stop it. In reality, most of what they spew is pure baloney and any bad legislation that actually exists tends to be not as bad as the Pratts claim and/or stopped by the NRA and other legitimate state and local gun groups. I know better than to believe anything that GOA puts out, and when the rest of the gun owners wake up and start giving their money to the legitimate pro-gun causes instead of the Pratts, then it'll be a good day for our side.

I've never posted about the Olofson case here, because, in addition to the fact that it was put out by GOA, it never passed the smell test. To believe the story--that an innocent man was charged with and convicted of a felony simply due to a mechanical malfunction occurring with one of his rifles--one would have to ignore the very real fact that intent is a required element of the crime charged, and that an actual malfunction in an otherwise legal and unmodified firearm would totally negate that element. Hell, AR-15 rifles will sometimes trip off multiple shots when the disconnector breaks or wears. Every AR-15 shooter knows this. I just had one that was doing it and I casually mentioned it a few posts ago. Does that make me a felon? No. Because I didn't deliberately cause it and I remedied it by replacing the disconnector.

So why was Olofson charged and convicted at trial when I wasn't? Well much of the reason for that can be found in this affidavit (below) that was used part and parcel of the case against Olofson. Clearly if the facts sworn to in this document are true--and there's no reason to assume otherwise, then Olofson clearly modified that rifle to fire multiple shots with each pull of the trigger, and that fact was known by the person that he loaned the rifle to as well. In fact that person--Robert Kiernicki--stated that he knew that the rifle would fire in bursts if he moved the selector switch to the rear (something that cannot be done on any unmodified AR-15) and that he did so on purpose at his gun club, which was how the rifle came to the attention of the lawful authorities. Kiernicki also stated that Olofson's gun "had the extra pin" that allowed it to fire fully-automatically. This would of course be an auto sear pin, and those aren't legal on any semi-automatic AR-15. A hole has to be drilled for one and that's not done by accident either. It's pretty clear that despite GOA's lies about a malfunction to the contrary, Olofson actually manufactured a machine gun and gave it to Kiernicki. And the rifle was subsequently tested by Bureau of Alcohol, Tobacco and Firearms examiners and repeatedly fired in automatic mode--sixty rounds' worth without malfunction.

The text is small, but if you click on it, it will get larger. 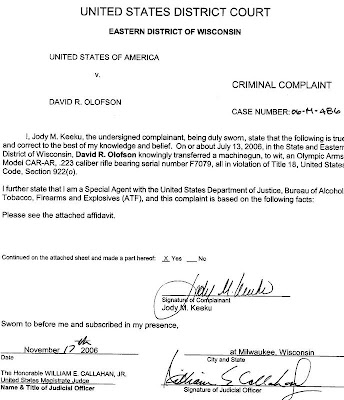 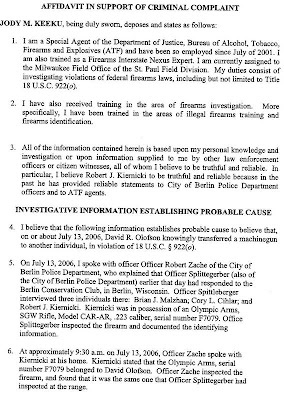 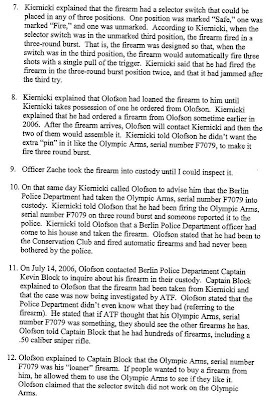 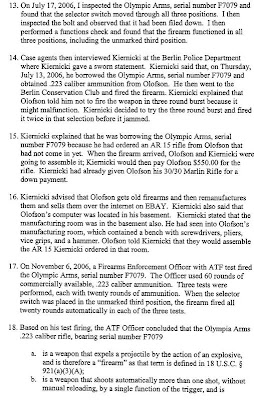 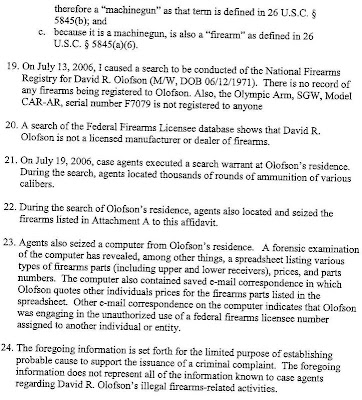 For what it's worth, I believe the BATF experts, and the investigating officers, both local and federal. In light of what they've testified to, the jury verdict in this case makes sense, as does the judge's sentence: 30 months in federal prison for Olofson, beginning today.

Now that I believe the story, I'll post about about it. I'm sure however that the truth coming out at last won't stop GOA, aka the Pratt rent and grocery fund, from continuing to spam out lies about this case and attempting to raise still more money from people who don't know the whole story. And I'll caution you all to be careful whose cause you choose to support, because criminals like Olofson and scammers like the Pratts give all of us decent gun owners a bad name and ultimately set back our efforts to vanquish the foes fighting to disarm us all.

Don't buy the hype, folks. Read the affidavit.
Posted by Murphy's Law at 9:31 AM