The Democratic Party's Denver office was attacked by two vandals last night. The two reportedly covered their faces before shattering several windows with hammers and riding away on bicycles. Behind those windows were posters depicting Barack Obama and calling for support of his health care scheme.

Naturally there was immediate outrage among local Democrats when the story broke, and Republicans, Conservatives and anyone else opposed to Barack Obama's health care scheme were blamed and condemned for it.

Unluckily for the Democrats however, the police quickly snarfed up one of the vandals, and it turned out to be a committed leftist (read: "Democrat") by the name of Maurice Schwenkler. 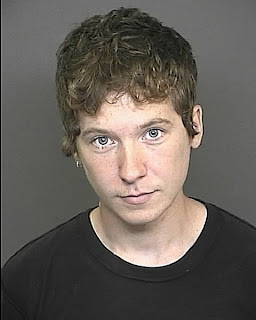 And who is Maurice Schwenkler, you ask? Well according to news reports, he's a paid activist for a so-called "Progressive" (read: "Democrat") front group called the Colorado Citizens Coalition, an organization that lobbied for Barack Obama's health care scheme.

Reichstag Fire, anyone? It sure looks like the extreme left has been caught red-handed trying to gin up support for their cause and discredit anyone who opposes them by attacking their own building and crying "victim". I'm guessing that they didn't expect Denver's Finest to be on the ball, but alas, DPD snared the alleged malefactor and darn the bad luck, but it's one of the Dems' own!

This is apparently what we can expect from Obama's crowd, folks. They'll attack us and call us names for disagreeing, and then they'll attack themselves and blame us...all because they can't convince a majority of Americans to go along with any more of their attempts to grab more control of the private sector and spend more money.

Good job, Denver Police. But for you guys, they might have gotten away with this.

UPDATE: More to come on this. Denver Police reportedly have Schwenkler's accomplice in custody now, too.

UPDATE #2: No one else in custody now, but it turns out that Schwenkler is a shemale and radical gay activist. It's friends are trying to raise bail money and they beg--publicly--for people to not call the jail and "out" Schwenkler as a guy who thinks he's a gal. As if making that request publicly isn't going to do that...do those retards think that jail inmates don't watch TV, listen to the radio, talk to family or see newspapers? Come on now...