December 7th, 1941, is a date that will live in infamy, but another date--December 23rd--has a meaning in relation to that attack, too.
When the battleship West Virginia (BB 48) was hit by numerous Japanese torpedoes and bombs, she sank upright, jammed alongside the wreckage of the battleship Tennessee. 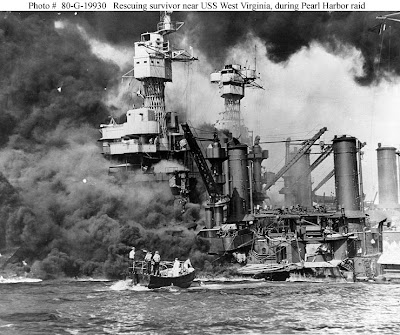 The West Virginia was refloated on May 17, 1942, and moved into Drydock #1 for repair and body recovery. 66 bodies were recovered from the vessel, many of which were found in areas that had never flooded. But the worst discovery--the one which shocked hardened salvage workers--was the three bodies found in Area A-111, the Forward Freshwater Pumping Station. This area was completely dry when opened, and the three bodies were found to be surrounded by empty ration cans, indicating that the sailors had been alive and eating for some time after the sinking. The fresh water tanks had also been opened. The three men had been trapped in this space with plenty of food and water...even emergency lights. Then the workers found a small calendar on one of the men...it had check marks on every day from December 7th through December 23rd. These men had remained alive for sixteen days, until the air was finally exhausted. Sixteen days.

Ironically, Navy divers had been down alongside the hull almost as soon as the fires were out, sounding the hull with large hammers and listening for any replies from inside the ship. However the area where these men were trapped was under the section of hull that was pressed up against the side of the Tennessee, and it was the only area that the divers could not get to during their sounding operation. By that fluke, they'd missed these three men and left them to die.

So on this day and again on the 23rd, remember in particular US Navy sailors Clifford Olds(age 20), Ronald Endicott(age 18), and Louis "Buddy" Costin(age 21). Their headstones all say that they died on December 7th, but in reality, they weren't nearly so lucky. Trapped inside the sunken West Virginia, they waited sixteen days in vain for help that never came.

The West Virginia got her revenge, though. Following her raising from the muddy bottom of Peal Harbor, she was rebuilt and re-fitted and participated in the battles for Leyte Gulf, the Philippines, Iwo Jima and Okinawa. Winning five battle stars, the West Virginia was also present in Tokyo Bay as part of the fleet which took the Japanese surrender, ending the war. This magnificent ship literally played a role in both the opening and closing acts of the war in the Pacific, and it would have been grand to have preserved her, but this valiant ship--once flagship of the Pacific Fleet--was sold for scrap and cut up in New York in 1959.
Posted by Murphy's Law at 8:50 AM