Bike ride and reflections on a pefect autumn day

Because of my wrist injury back in June, I was unable to ride my bike all summer. But that ended today as I trucked it out to Harpers Ferry National Park and spent a couple of hours enjoying the beautiful Fall weather along the river.

Riding through the old town past the railroad station, I came to a gate that blocked a road that once was. The road used to run along the Potomac River on the south shore between the remains of a small canal and the B&O Railroad tracks. Since the road was closed a few years ago, nature has reclaimed much of it and what's left resembles a wide path through the woods that's just perfect for hiking and bicycling.

Riding out to the remains of an old dam, I stopped to just take in the river and the cool, crisp air. 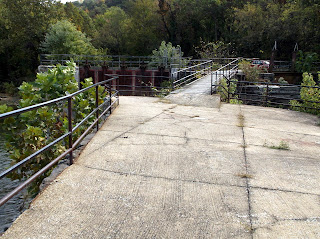 Just downstream, a man was fishing with a young girl, and on the rocks below the dam, a young man had just hauled in a nice small-mouthed bass. He offered me the fish but as I had no way to transport it on my bike, I thanked him and declined. He threw the fish back into the water and cast his hook out for another one. 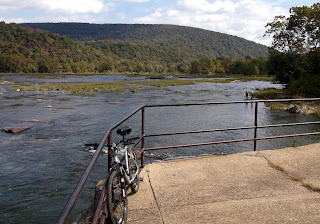 I spent some time just watching the river and the hawks riding the currents above, appreciating the day and reflecting on the fact that every day that we wake up alive we get a gift from God. None of us are promised tomorrow so on days like this it's just good to get out and enjoy it and celebrate life. 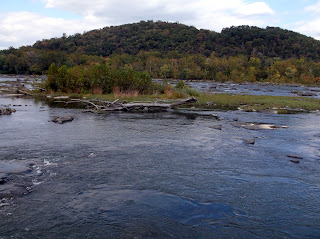 Going back, I stopped to climb up onto the railway bed and just spent some time walking the tracks. Pretty peaceful when no trains are around. 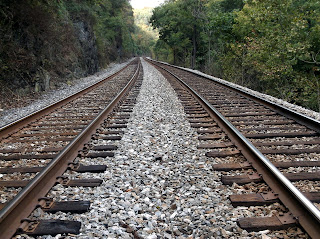 I saw some tool marks on the cliff face next to the tracks, the remains of bore holes where blasting crews drilled the rock and dynamited it to make way for the train tracks. This is an old rail line, pre-dating the Civil War, and the men who originally drilled these holes and blasted down the rock are certainly dead of old age, as, I suspect, are their sons and grandsons. But the marks in the rock that they left behind will likely be here for hundreds of years. 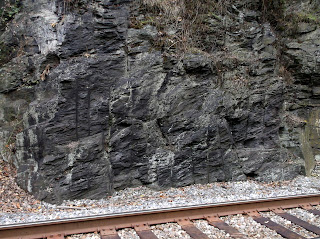 Finally I rode back to town, passing thew Swiss Miss Ice Cream Shop where Sharon, the owner, used to spoil Lagniappe with ice cream cones. But Sharon is retired and gone now, having sold the shop, and Lagniappe's gone too. I took Murphy there a few times before Sharon left, but he was never as wild about ice cream as Lagniappe used to be. Times change, and life goes on, rolling along like water down a river or trains on the track. None of us can know when or how ours will end, but I know that here and now, today, I'm alive and appreciating my day. And I'm thinking that this evening will be a great night for a steak on the grill and an ice-cold beer or three.