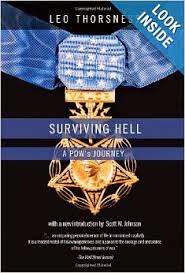 Recently I had the opportunity to read Surviving Hell--A POW's Journey by Leo Thorsness.

Major Thorsness was an F-105 pilot who flew "Wild Weasel" missions over N. Vietnam. These were the aircraft that went in ahead of the strike forces to try to lure enemy missile launchers to shoot them down so that they could turn around and attack the missile launcher once they'd succeeded in evading the missile. Not only was it dangerous on it's face, but it also meant that they were the first ones into the target area and the last ones to leave. It was some ballsy stuff, to be sure.

But Thorness had brass. He was nominated for (and subsequently awarded) the Medal of Honor for his heroic actions on April 18th, 1967.

Sadly, Leo Thorness never even knew about this for years because just twelve days later, Thorsness and his back-seat Electronic Warfare Officer, Captain Harold E. Johnson were shot down by a pair of Mig 21 fighters, on what was to have been their 93rd mission out of the hundred needed to rotate them back home. Forced to eject at over 600mph, Thorsness suffered severe injuries to both knees which left hi unable to walk and he was captured shortly after hitting the ground. Harold Johnson was captured a short distance away. Also shot down and captured that day was Thornsess' wingman, 1st. Lt. Robert Abbott. (This event is also well-covered in Thud Ridge by Jack Broughton, who was also part of the unsuccessful rescue effort that day.)

Thorsness and his fellow pilots spent the next six years in captivity, but they were kept separated and did not see each other again until they were released in 1973. Aggravating and adding to his injuries from the bailout, Thorsness was tortured by the North Vietnamese, a common practice for those people that Jane Fonda identified with and supported. He talks about the brutality and the isolation of being held in solitary confinement, and learning the prisoners' "tap code" that they used to communicate with each other through the walls.

In 1970, the North Vietnamese decided to consolidate all of their prisoners in one large prison in Hanoi, Hoa Lo Prison, better known as the Hanoi Hilton. It was there that he spent time in the company of other captive warrior pilots such as Bud Day and James Stockdale (both of whom were Awarded the Medal of Honor for their leadership and resistance actions as prisoners) and John McCain.

On a side note here, I have never been a fan of John McCain the politician, but by every account I've read, he was a rock-solid resistor while captive and he'll always have my respect for that. During his run for President, Senator McCain was blasted by some doper lefty who cobbled up a hit-piece accusing him of collaborating with his captors, and that lie got a lot of play, but the accounts of every one of his fellow prisoners, including Thorsness in this book, crush that lie.

One of my favorite stories in this book is when Thorsness tells of how, when the POWS were finally grouped together, they decided that they wanted to hold a church service on Sunday. The first time that they did it, the guards broke it up and told them that they could not have a religious service. The officers talked among themselves and voted unanimously to defy them on the next Sunday and they did. Come Sunday morning, the ranking officer called the men together and began to lead them in The Lord's Prayer. "Our Father, who art in Heaven, hallowed be thy name..."
And that was as far as he got before the guards rushed in and took him away to be disciplined. But as soon as the guards hustled him out, the second highest-ranking officer took his place in front of the group and began again. "Our Father, who art in Heaven, hallowed be thy name..." Then the guards rushed in and grabbed him. And as soon as they'd dragged him off, the third highest-ranking officer stood up: "Our Father, who art in Heaven, hallowed be thy name..."
And down the line it went, until finally the Viets let the sixth-ranking officer complete the service. (Thorness admits to sweating a bit, as he was the seventh.) After that, they were allowed their service unmolested, a rare victory for the so-called "powerless" captive Americans.

He finally made it home in 1973, along with the rest of the prisoners, but his injuries prevented him from ever flying again. He ran an unsuccessful race for the US Senate against George McGovern, and then he moved to South Dakota and was narrowly beaten for a US House seat by Tom Daschle. Daschle won by 139 votes out of 129,000 cast. Thorsness than returned to Washington State and won a seat in the State Senate.

The book is short, but it's an easy read and one that, once started, you don't want to put down. I'm glad that I bought it and I recommend it wholeheartedly. A God-fearing patriotic family man who never let adversity beat him, Leo Thorsness is one of those men who personifies what it means to be a great American. Today's youth and leadership could take a lesson or two from him.
Posted by Murphy's Law at 6:02 PM