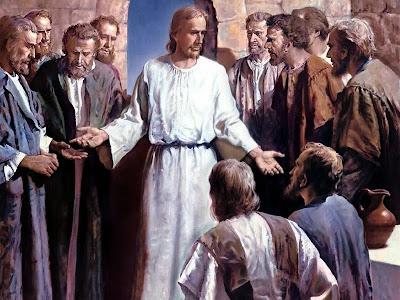 He was resurrected. He came back. And many people saw him.

1) Mary Magdalene (Mark 16.9-11; John 20.11-18), Peter in Jerusalem (Luke 24.34; 1 Cor. 15.5), Jesus' brother (insider skeptic) James (1 Cor. 15.7). "And they went out quickly, and fled from the sepulchre; for they trembled and were amazed: neither said they any thing to any [man]; for they were afraid" (Mark 16.8). Some of the New Testament authors explicitly claimed to be eyewitnesses to Jesus' resurrection (and transfiguration). Peter said, "We did not follow cleverly invented stories when we told you about the power and coming of our Lord Jesus Christ, but we were eyewitnesses of his majesty" (2 Pet. 2.16). John also said, "That which was from the beginning, which we have heard, which we have seen with our eyes, which we have looked at and our hands have touched...we proclaim to you what we have seen and heard" (1 John 1.1,3).

8) A crowd of 500 "most of whom are still alive" at the time of Paul writing (1 Cor. 15.6). This may have been the same group as in Matt. 28.16: the rendezvous was to "to Galilee, to the mountain to which Jesus had directed them." Unlike the other accounts which were unexpected and by surprise, and to gather such a large number of people, this meeting was held outdoors. The women were told to tell the disciples to meet Jesus in Galilee as well. "And when they saw him, they worshiped him: but some doubted" (Matt. 28.17) may be a reference to many present, both believers and non-believers. Paul had firsthand contact with them. So it was not a legend. He knew some of the people had died in the interim, but most were still alive. He is saying in effect they are still around to be questioned. You can talk to some of the witnesses. He never could have made this challenge if this event had not occurred.


And equally noteworthy is the fact that many who saw him were subsequently imprisoned and/or tortured to death, but NOT ONE OF THEM ever renounced their claims to having seen Jesus back among the living. If YOU were facing a gruesome torture death, would you die for a lie? Fact is, too many people saw Jesus again for there to be any doubt as to his resurrection. He came back. And on this day we celebrate his return, and his promise to return again.
Posted by Murphy's Law at 5:00 AM