The M1 on the right has been in my gun safe for about a decade. The stripped receiver on the left just got here. They both likely left Springfield Armory together back in June of 1943, eventually going their seperate ways during or after World War Two. 1665008 was eventually loaned to Denmark and returned, heavily rebuilt with Danish parts, in the early 2000s, then sold to me by the Civilian Marksmanship Program(CMP). 1665009? Who knows? The CMP just released it as a refinished stripped receiver, suggesting that the complete rifle was too badly damaged to be sold as a complete unit. But now they're together again, and I will rebuild the stripped receiver into a "period correct" Garand, just as soon as I can acquire a few more parts for it. 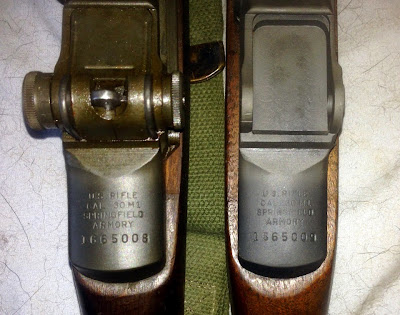 What are the odds of these two finding each other again after 71 years?

To be fair, most of the credit is due to CMP member Fatbrewer, who bought the stripped receiver from the CMP, then tracked me down after seeing my information attached to "5008" on the list of known Garand owners at USrifleM1.com. We talked, a deal was struck, and the two siblings have been reunited.

A better article will follow once the second rifle has been rebuilt, and in the meantime, I'd love to get any information at all as to how that rifle became a stripped receiver--where did it go and what was done to it to get it to the point where it had to be totally disassembled and refinished? was it a damaged rifle, recovered from some battlefield after a fight, or was it just a victim of decades of neglect? All the CMP can tell me is that they got that serial number back from the US Army in 2004 and that is wasn't part of the Danish group. Any thoughts or ideas? Fatbrewer's got some great ones, but no hard evidence. What do you think?
Posted by Murphy's Law at 9:36 AM