The other night we were walking the Playa Norte in Ciudad del Carmen and we saw this small outdoor restaurant out towards the beach. All the others in the area were closed and this one was closed too but still had some people at one table even though the lights were off. We walked up and asked where we could get two beers because we just wanted a drink and the waitress went in the darkened kitchen and brought us two, telling us that we could not leave with them. She let us sit at a table there, at which point, Guadeloupe, a wonderful woman at the occupied table, came over and began talking to us in broken English, which was about as bad as our Spanish. She wanted to try to converse with us and we obliged. Next thing we know, she asks us if we want food and summoned the waitress over take our order. “Shrimp or fish?” She asks. “Yes!” We reply. So she goes over to a cooler, pulls out a whole fish, and takes it into the kitchen, returning shortly with two plates, one having probably the best shrimp I’ve ever had in my life, and the other holding that same fish, still whole but now wonderfully seasoned and fried. 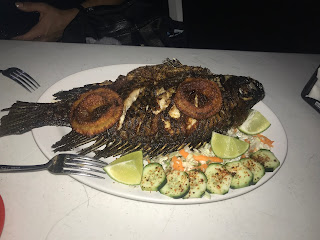 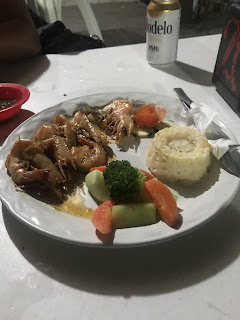 We thought Guadeloupe owned the place or the waitress was her daughter by the way she was calling the shots but when I asked her it turned out that she’s just a regular customer who has pull enough to get this girl to open up the kitchen again and prepare a huge meal past closing time. She and her husband talked with us while we waited on the food, and we were almost family by the time the dinner came. And we sat there and ate this incredible food under the stars, the only two customers on this beach patio. And this is why I’m loving Mexico. These people, policia notwithstanding, are often wonderful.