Power's back and so am I

I came back from two weeks in Mexico to a city hit by Hurricane Zeta and no electricity. Fortunately a month before I left, I bought a used generator "as-is"/non-running for $50, and it probably cost me another $50 in parts and several hours of my rime before I had it running again. It paid for itself this past week-end because I just had to run a couple of cords into my kitchen and suddenly I had a fridge/freezer, coffeemaker and microwave running plus phone chargers. But now the power is back and the generator is back offline, the cords are stowed, and I'm sitting in a bar watching election returns and regretting coming back from Mexico.

It's a beautiful country, but not without it's problems. Nothing made this more clear than when we first crossed the borfer into Nuevo Laredo at 6am. We cleared the bridge and headed down to get our travel documents and pay the car deposit (A fee to make sure I bring the car back instead of selling it in Mexico) and we were approached at the first traffic light by two guys in a car who began shouting that we were lost and should follow them because "dangerous".  Well I'd done my homework and knew where I was going and it wasn't that way. We told them we'd follow them and then when they pulled out to guide us, I turned the other way and dove down the ramp to the banjercito where I needed to be. As we passed behind the car I noticed it had no tags. Nope, not suspicious at all. Later on we watched on a travel page for people driving in Mexico and heard how several other people had been roadblocked and stopped by these guys and others, even in broad daylight. One person posted a video that showed three cars blocking him in--two in front and one behind--and pretty sure that the car we dodged was one of them. I'm guessing we crossed over before the bad guys had their shit together and we got through otherwise unmolested. Still, I was missing my trusty sidearm and thinking about how had we been armed and similarly waylaid, we could likely have broken that ambush by unassing the car and taking the fight to them instead of sitting there waiting to be robbed. High alert down to Monterrey, but once past there, we were pretty safe save for the odd rogue cop.

Southern and Central Mexico are beautiful but Northern Mexico within a day's drive of the US is pretty featureless and dull. We drove all day and crashed for the night in Queretaro, which is an old colonial city that's doing quite well today as a tech hub. Beautiful city center, great restaurants and music, and a hotel room overlooking the square definitely impressed Beth, who had never been to Mexico before. 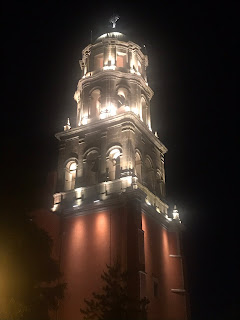 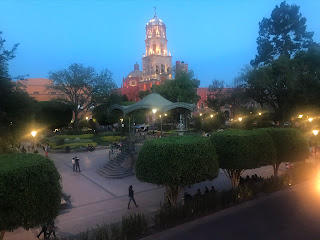