There's nothing like having a good dog behind you when you're hurt.

And Murphy is certainly nothing like a good dog.

So I'm out in the woods behind the Lair with my faithful, loyal canine companion Murphy today. Owing to the leaves on the ground, I catch my foot on a branch that I didn't see and I fall forward, coming down right on my left hand any my injured (and almost healed) left wrist. Doing it one better, my hand actually comes down on another branch such as to just catch the fingers of that hand and bend my wrist back well past 90 degrees, into the realm of "Oh my God that seriously hurt!" I've got the Master Caution light going off inside my head as I try to draw a breath through tightly clenched teeth. I can already tell that this is going to hurt for a while just as soon as the shock wears off and I've probably suffered new damage to some extent. But just as I start to push myself back up to my knees prior to standing back up, I hear a rustle of leaves behind me and two paws slam into my back with every ounce of Murphy's 90+ pounds behind them. I go right back down on my wrist again, not really comprehending what just happened or why, until I look over to where that idiot dog is and see him down in a "play crouch" with his tail wagging to beat the band. He gives me a light bark then scampers away, obviously expecting a chase. Apparently, he decided that because I was down on all fours, that I was fair game for some full-contact roughhousing. Ass dog.

No matter how often that little Timmy got stuck down a well, Lassie ran for help every time. But Murphy'd be more likely to drop rocks and sticks down that well because he's a jack-ass that thinks everything's a game.

Now to be fair, Murphy's not the first of my German Shepherds to do me like this. I was out in the woods on a winter day with my first Shepherd, Oliver, way back when. There was a fresh layer of snow on the ground as we crossed a field, and I put a foot down in a hole that the drifting snow had covered. Instantly I went down with a wrenched ankle, the waves of pain rolling over me as I lay in the snow. Oliver saw this and ran back to me.

"Get help, boy," I said, remembering those old "Lassie" reruns. But Oliver just stood over me for a moment contemplating the situation. Then he dropped down into the snow to lie next to me and snuggled up against my side. Rescue Fail. Had this been an actual back-country emergency...

As for Murphy, Ima gonna make him watch old TV shows about loyal dog companions until he understands how it's supposed to work when his human goes down. As it stands right now, I'm wanting Rin Tin Tin for a pet but it seems like I've just got Inspector Clouseau's sidekick, Cato. 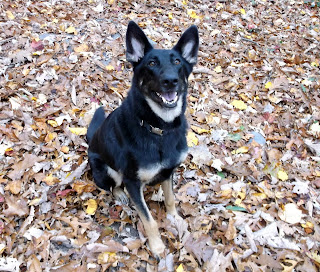