Last night I just finished re-reading a favorite book of mine: Forever Flying, by the legendary Bob Hoover. 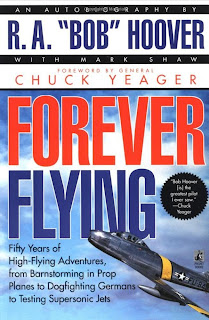 Here's a guy who has definitely "been there and done that" in regards to aviation, and he's met practically everyone who was anyone along the way, from Orville Wright, to Charles Lindbergh to the astronauts who walked on the moon. And he's flown just about every aircraft type imaginable, starting out as a pre-WW2 civilian pilot, then getting into the Army Air Corps during the war, where he spent much of his time as a military test pilot for newly-delivered aircraft before he finally managed to wangle a transfer to a fighter unit. Shot down by the Germans, Bob was a prisoner for a while, until, in the last days before the fall of Germany, he escaped from the POW camp where he was being held, snuck onto a German airfield, stole a fighter plane, and flew it back to freedom.

For most pilots, that'd be enough, but Bob Hoover was just getting started. He stayed in the service and wound up as a test pilot at Wright Patterson Air Force Base, where he evaluated new aircraft types and captured German stuff. There, he made the acquaintance of Chuck Yeager and the two became life-long friends. Hoover might well have been the first pilot to break the sound barrier in the X-1, but after a unauthorized stunt with one of the Air Force's new P-80 jets, he was taken out of final consideration for the role of chief X-1 pilot and Chuck Yeager got it instead. (Hoover flew the chase plane and was slotted as back-up pilot.)

Over the rest of his career, Hoover went from Air Force test pilot, to test pilot for North American aviation during the beginning of the jet age. He flew the F-86 and the then-new F-100, crashing a couple of the letter before that aircraft's quirks were ironed out. He also flew exhibition flights in over 2,000 airshows around the world. Often described by other pilots and one of the greatest pilots in the world, Bob's book is chock full of the kind of stories that exemplify "The right stuff" that he and a few others had back in the day. If you like flying stories or aviation history, this book is a must have for you.
Posted by Murphy's Law at 9:25 AM