And then there were three. So much for the "fostering" idea...

I went and added little Merida to the sidebar today so I guess that makes it official. She's just fitting in too well here. The other dogs have taken to her despite their initial reluctance because she worked so hard at befriending them. Even Belle the diva finally melted. And Murphy may not act like he likes her around the house, but I've started taking all of them out in public together and he very clearly guards her when other people come up and want to pet her. Nothing aggressive but he always seems to put himself very close to her if not in between her and the interested person to the extent that people point out how protective he's being. Belle does to to an extent, but she's still a princess with her own need for attention. Frankly I expected jealousy from her but haven't seen a bit, not even when Merida eats out of her dish, takes a drink when Belle's drinking from the water bowl, or steals Belle's bed.

Everybody's just getting along and they even lay down and sleep by her at night now. I was letting her out my bedroom door into the back yard special to save her the longer walk the other dogs make when I put them out the side door (they have to go the length of the house on gravel to reach the back yard for "dog business") but now she runs out the side door with them, preferring the long walk with her new pack over the easy shortcut with me. She's also learned how to jump up on my bed, which is almost as far off the ground as she is tall, but she hasn't learned how to do it without crashing into me like a 45lb wrecking ball whilst I'm still dozing. Bottom line: She's real cute and everyone loves her and it would be cruel to uproot her again when she's finally feeling secure and happy. So she's staying. 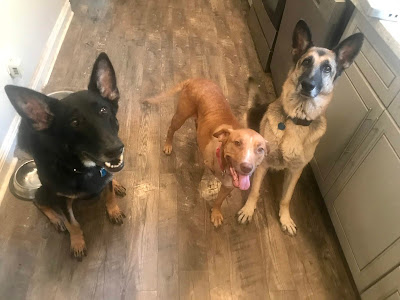 The other night I took all three to the dog park, but when we got there the park was closed. So I took them to the bar instead. (OK, two bars and a gourmet french fry shop...) She's much more confident walking in with her pack then when I took her solo a couple nights prior. And they stuck to her instead of trying to hustle pets and snacks like they usually do. 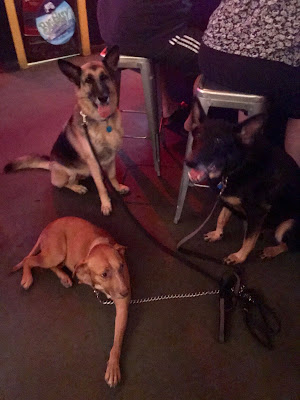 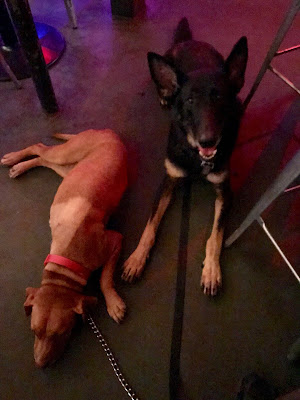 We got home and she was all tuckered out and went right to sleep, no doubt dreaming dreams of finally finding her forever home. 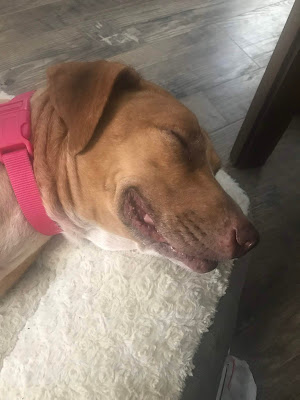 Sometimes little dogs' dreams do come true.
Posted by Murphy's Law at 11:15 AM