A day at the range

I needed this day. It's been too long, and Southern Decadence festivities are inundating the French Quarter this week-end so it was time to go visit real America for a few hours.

Started out on clays with the Ithaca 12. Took me a bit to find my groove and I missed some ridiculously easy ones, but as soon as I started throwing pairs, I cleaned house. Apparently I do better when I don't have time to think and try to plot the clays. When I don't give myself time to over-think it, I hit them fine. 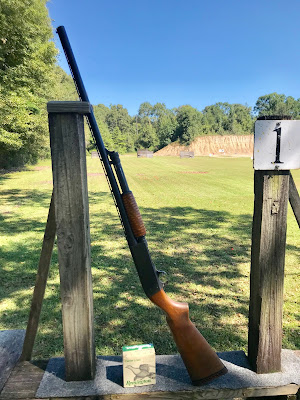 Then it was over to the rifle line.
I'm old enough to remember when I was literally the only one on the firing line with a "black gun" or "assault rifle" and I got snide remarks from other shooters for having an AR-15 20 years ago. But these days I'm often the only one on the line without one. Times have changed...and good luck banning something that most shooters seem to have these days.

But for me, it was a trip in the Wayback Machine. 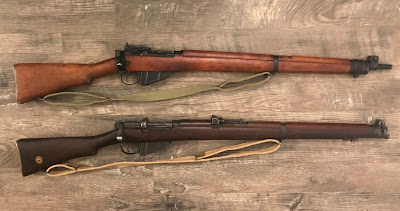 Bottom one is a Short Magazine Lee Enfield (SMLE) #1Mk3* made at Lithgow, Australia. This rifle was the British Commonwealth infantry weapon from World War One until it was supplemented and replaced by the #4 above it starting in 1941, but some of the Commonwealth countries like Australia and India kept manufacturing and using this variant through World War Two, and in the case on India, production continued into the 1960's, and then they changed over to the new NATO 7.62x51 cartridge and continued producing it
into the 1980's. But this particular one was made in Australia in 1941 and undoubtedly saw some service in WW2.

The top rifle is an "upgraded" version, the #4mk1. This one was manufactured at the Royal Ordnance Factory, Maltby in South Yorkshire, Britain. It was also made in 1941, and I bought it back in the late 80's for the sum of $76.00 from Southern Ohio Gun when Century International and others were bringing in the "endless" supplies of military surplus arms at dirt cheap prices. (I wish I'd bought so many more but most of us didn't see them ever running out.)

Both rifles fire the .303 cartridge and as I still had seventy rounds left of South African surplus .303, I took these two out to the range. I have not fired this #4 since the late 1980s or early 90's so it needed to be sighted in. The first two rounds at 25M hit at nine o'clock there and didn't really please me. The third took me a second to find...what the heck?! Look at that keyhole at the left edge of the target where the projectile went through sideways. 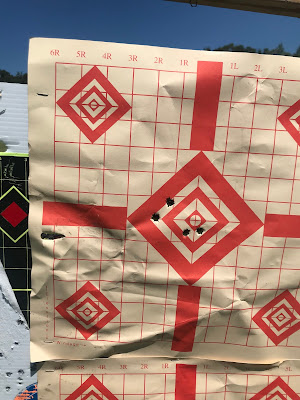 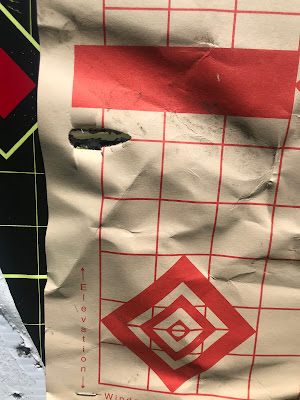 That got my attention. I recovered the spent brass and it looked fine. I pulled the bolt and checked the bore. Looked ok. I fired two more and they were centered, just a tick low as they should have been. I eventually chalked it up to a ammo quality control matter. The remaining rounds seemed to have fired fine and most of them hit the 8" steel gong at 100M solidly. (And now I wonder how many of the misses were on target but went sideways like the one above...)


Then it was Thompson time. 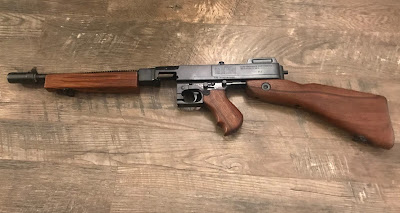 I took the 1928 Thompson out to play for a bit. Always fun. Set a target out at 30M and made Swiss Cheese out of it by putting front sight on the target belt buckle and firing short bursts, letting muzzle rise carry the rounds up the target's belly and chest area. Easy peasy. 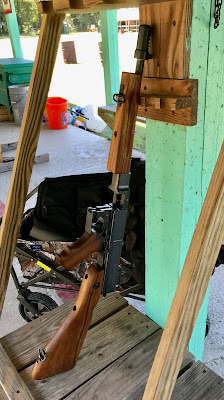 I heard another rapid-firing weapon down the line and curious to see, I popped down to see this joker rapid-firing an AR with NO SIGHTS ON IT! Yep. No front or rear but he was going to town. 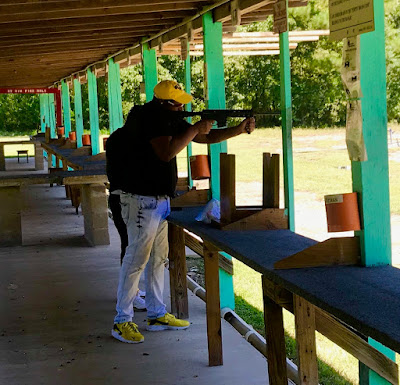 
Still, a great day indeed, and long overdue.
Posted by Murphy's Law at 11:28 AM