Despite the fact that we're enjoying nearly record highs in the market and some of the lowest unemployment in history, particularly among minorities, the Democrats, still thinking that they could do better but afraid to run against that record, are trying to topple both the President AND Vice-President Pence and salivating at the idea that this would seat Speaker of the House Nancy Pelosi (D-Moonbat) as the replacement President.

Realistic? Normally not really, but with the lapdog media enthusiastically carrying their water and blasting out non-stop propaganda and outright lies 24/7 and a voter base made up of millennials that confuse our electoral process with some reality TV show...this could be the ultimate stolen election. By now we all know that when America votes and all Americans are heard from, conservatism usually wins and fraud and litigation in cherry-picked courts is the only way that Dems and their far-left agenda can reliably triumph. They know it and they plan for stuff like this. They don't want to put their ideas in the arena against ours or against Donald Trump's successes so they're looking to just undo the 2016 election and claim the power that the voters denied them by going this impeachment route AND targeting the V.P. too. And right now they're sending up their trial balloons now to gauge public sentiment to see if they can get away with it.

Let me step uncharacteristically back into political posts to say that while many of the liberals in my city think that it would be great because, Constitution be damned, the only thing that matters to them is Trump out and them in, I and many others would view this sort of electoral treachery as being akin to that first cannon shot fired at Fort Sumter back on April 12, 1861.

These same liberals think that once they get total power then can come for our arms. I hold that they won't have to. Many up us will bring our arms right to them. Only we won't be turning them in; we'll be settling this shit once and for all. Maybe the Dems and their Brownshirt supporters can overthrow our elected President. Maybe they can deny us our vote and then come for our property and our Rights. Maybe they can do that. But if they do, I'm betting that a lot fewer of them will still be around when the smoke clears. 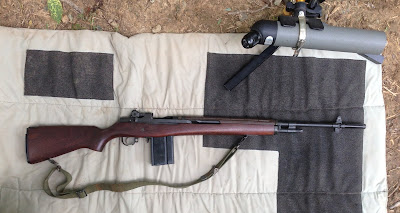