Sometimes it pays to be a squirrel

Sorry for the prolonged absence. Things have been what things have been here. But I'll try to do better now, especially with a pending international trip coming up to give me stuff to post about.

But today's post is about squirreling stuff away, and how sometimes it gets you a guest spot on the reality show "Hoarders", but other times it really pays off.

The last couple weeks or so, I've been working on a kit-build Glock pistol. I like the idea of building one up from scratch and putting in all the stuff that I want in it. Accordingly I got a frame and a slide and a quality barrel and started building.

Did anyone else notice a scarcity in gun stuff lately? Turns out that Glock parts are now in demand and many are now apparently made from "unobtain-eum", meaning back-ordered or unavailable everywhere. But for once, my pack-ratting paid off. I recalled doing a bit of upgrading on my first Glock--a Model 23--back about 20 years ago. (Where does the time go?) It occurred to me that I might have a couple of old odd-bits around from that work that I could use as standy-by parts just to get this one complete and functional while I wait on back-ordered parts. So I went to the old tool box where I have always tossed carefully stored extra gun parts and what did I find in a little pull-out marked "Glock" but damn near enough brand new, factory-packaged internal small parts to build TWO Glocks! WTF? Where did these come from?  All I can figure is that once upon a time, I decided that I needed to put in a cache of small easy-to-break-or-lose parts for the one Glock that I had (I used to do that a lot) and I forgot that they were there.Now I have several Glocks but thanks to their engineering foresight, many if not most of these parts are universal across the Glock family and every one of these parts put away for my old G-23 is a perfect fit in my new-build Glock 19. Freaking yes!

I also realized when comparing that some of the internal parts that I ordered that did arrive were actually pretty shoddy when compared to OEM Glock parts, so all the new off-brand slide parts that I'd already installed got replaced with new old stock original Glock parts. The slide now works noticeably better when installed on my older Glock 19 frame for testing. If course most of the main parts and springs are Apex and Wolff but those that aren't will are now Austrian-made stock. 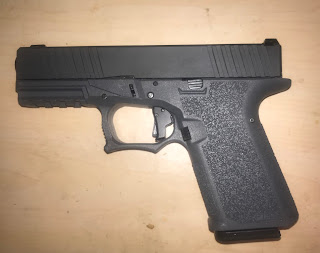 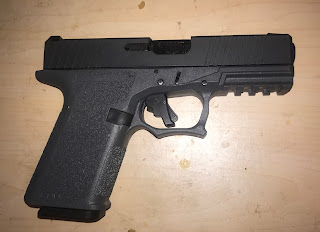 The gun was finished last night and tested this morning. After the first magazine filled with Federal factory rounds all fired as they should have, I fed it another couple of magazine filled with older misc. Federal and Winchester defensive rounds that I'd rotated out of other carry mags. Those also shot flawlessly. Then the acid test: A magazine filled with assorted junk rounds that just accumulated in my "loose rounds" can. Everything from Blazer to foreign military to loose hydrashocks. And but for one bad cartridge that refused to fire, the pistol digested everything and put them all right where I wanted them. The Apex trigger is short and crisp and resets briskly with a tactile click and I think I'm in love with it. 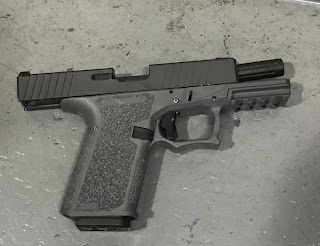 Only downside to the range trip was being swept twice by the only other shooters on the range, first by a guy with a new shotgun (but at least the action was open and empty...and after I suggested that he keep that thing pointed downrange at all times, he apologized and it did not happen again.) Second time was by a girl shooting with her boyfriend as I was walking out. She fired one round then turned with the gun in her hand and swept both he and I, and that firearm was still loaded. I was less nice in my admonition about that and then her boyfriend began to dog her out for it and she got upset and I decided that it was just time to keep going. This is why I hate this particular indoor range and just use it for testing now.

I promise to start posting again and putting up more pics of the housewolves, porch cats and back-yard chickens that I now have here. (Yep--got chickens.) Also another drive through Mexico is pending and there will be stories and pics. Stay tuned, and if you want me posting more, comment more and let me know that I actually still have more than three readers. (Hi Mom!)