Perhaps I should name him "Dammit".

On second thought, no. I mean, he's already demonstrated that he won't respond to that.

This morning, I took him out into the fenced dog area of the yard. He was on his leash, and he did just fine, although he saw a couple of the cats nearby and he clearly wanted to chase them when they ran. The problem came when I took him back into the house. I fell victim to an old habit that I'd gotten into with Lagniappe, and without thinking, I reached down and unhooked his collar BEFORE we were all the way back in the house. No dim bulb, this dog--he realized what I'd done before I did and like a black flash, he was off. He backed up about ten feet, looked at me, then began to dash and caper around the yard like a Dervish.

"Come!" I commanded to no avail. He wasn't coming back. I went after him and tried to get him to back, but he was free for the first time since coming here and he was going to play. He'd run right up to me, lower his head to the ground, wag his tail, and wait for me to grab at him, at which point he'd bolt off, run a half circle around me just out of my reach, and do it again. "Come here, Dammit!"

But the result was always the same: He'd get within a few feet and pause, but dart away like a rocket as soon as I started to move.

OK, cute but aggravating...and I have someplace to be this morning. But I can't get close enough to grab him, nor can I lure him close to me by holding something out to him, or just sitting on the ground, pretending to ignore him. Even when I walked away from him, he'd follow, but never all the way back into the house. He wasn't leaving, but he wasn't coming in, either. "Come here, Dammit!"

Wow, that dog's fast. And agile. And still free. Aaarrrggghhhhh......

I't my own fault. The foster warned me about him. She gave three instructions: Never let him get wet, never feed him after midnight, and never let him get off-leash outside. And here, on Day #2, I'd already screwed up.

I'll spare you all the details, but it took twenty minutes, help from a neighbor, and a ruse to lure him into the neighbor's shed. He's back now. And now that we're back in the house, he wants to be best buddies again.

And how do you stay mad at a face like this? 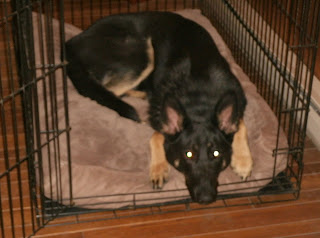