Because it was a nice day, and because Proud Hillbilly was free, we went to the range today, she with her carbine and her new Glock, and me with my trusty Beretta and one of my M1 Garands. 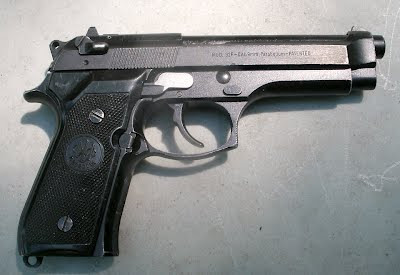 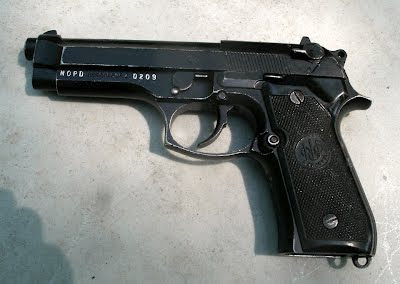 An oldie, but an ex-New Orleans Police Department gun. I'd bought it for it's markings and history alone, and frankly I'd not shot it for years, relegating it to wall-hanger status until Todd Green taught me how to run it well at his Aim Fast Hit Fast class. Now it's one of my all-time favorites.

The Garand is a Winchester-made gun that came with a practically new Danish VAR barrel. I got that one in 2000 at Camp Perry when the Danish guns were first being sold. At that time, you lined up to go into a hut where the CMP armorers were handing out rifles from big crates containing 100 guns each. The rumor had gone down the line that there were Winchester rifles in the crates and as Winchesters are fairly rare, everyone going in was naturally asking for one. Of course this had the armorers a little frustrated after a while, so when I got there and casually asked if they had any Winchesters, the guy in front of me finally snapped and yelled: "OK I've had it! Everybody listen! The Winchesters are few and far between! We've only seen a couple so everyone needs to stop coming in here asking for one. We're offering Garands, period." Then he looked at me and said: "If you want a rifle you can buy THIS one!" Then he reached into the crate and grabbed a rifle at random. He handed it to me and I saw the logo on the receiver: "Winchester".

Of course I yelled "Whoa--a Winchester! Thank you!" and everyone back down the line started saying "They do have Winchesters in there! They're hand-selecting them!" The armorer was as shocked as anyone by his luck of the draw and not at all happy because now even more people were going to be asking for them.

Today though, it was used to kill paper plates at 100 yards, which it did quite well whenever I did MY part and kept the sights on the target as I pulled the trigger. I even managed to go seven-for-eight standing off-hand, and considering that I haven't shot this rifle in a couple of years or any Garand for a while now...well I was pleased. One minor flaw surfaced as it refused to fire one particular batch of reloads, giving me lots of "CLICK!" noises courtesy of light primer hits. But it fired the other batch flawlessly, so blame goes to those old reloads and not the rifle.

PH shot her carbine and the Garand on the 100 yard range too, and I introduced her to sitting and prone position shooting. 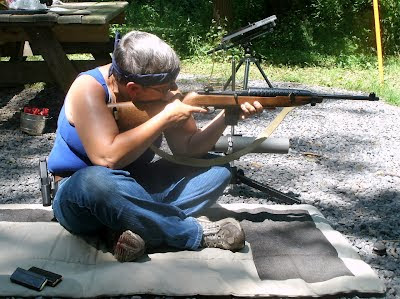 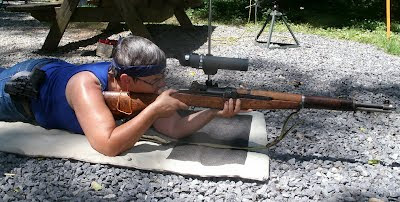 She did good with both. As is usually the case when I shoot with her, I came away impressed and proud of her progress.

And here she is with her Smith and Wesson Airweight: 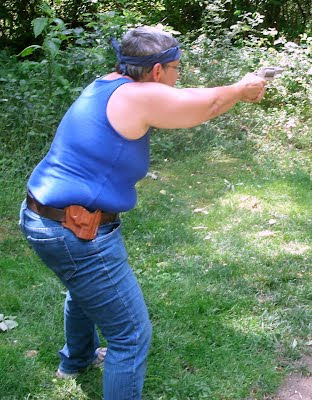 Not exactly Bianchi Cup material yet, but if I were a bad guy, I'd think twice before messing with her.

All in all, a good day indeed.