Why my house is always dirty

There's a reason that I seldom vacuum the Lair. That reason weighs 90lbs or so and goes by the name of Audie Murphy.

Today I was vacuuming anyway, despite him, because I've got company coming for this week-end's shoot. And typically, Murphy was acting a fool, either chasing the vacuum wand around the floor and trying to get in front of it or grab it, or, if confined outside, barking like mad at it through the window. Murphy really doesn't like the vacuum.

Now Murphy is a sneaky little S.O.B.. If he can't engage the vacuum head-on when I'm trying to use it, he'll wait until I've turned it off and walked away, and then he'll pounce on it while it's "sleeping". Several times I've heard a commotion and came into the room to catch him shaking the vacuum's hose back and forth, trying to kill it before it awakens and resumes cleaning the floor.

Well this time I'd put him out on the deck as I went to vacuum the stairs and upper rooms. However I'd left the sliding door ajar a few inches, and Murphy apparently managed to get a paw or his nose in the opening and levered the door open enough to facilitate entry. Then he attacked his nemesis, striking from behind by grabbing it's power cord.

My first indication of this latest assassination attempt on my appliance was when the vacuum tank at the top of the stairs suddenly lurched backward and toppled down the steps with a crash. Naturally the tank broke open and dust and dirt and dog hair went everywhere. All I could do was give myself a facepalm as, down in the living room, a German Shepherd was doing a victory dance. And this one's on me. He's done this to me before and I should have taken better precautions.

Why can't I just have a normal dog like everyone else? 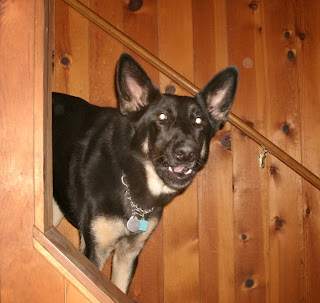 The vacuum bowed his head because he knew that he'd been beat.
And he laid that ton of dog hair on the ground at Murphy's feet.
Murphy said: "Vacuum just come on back if you ever want to try again.
"cause I told you once, you son of a bitch, I'm the best there's ever been."

With apologies to Charlie Daniels.
Posted by Murphy's Law at 3:57 PM