I have my father's guns now, three shotguns.

The first one is an Iver Johnson Champion 16 gauge single-shot that he bought back when he was a teen. The finish is original, if a bit neglected.

His brother told my this week how they went to a hardware store together back in the 1950's and my dad picked it out and bought it. Somehow it wound up disassembled and tucked away in my grandmother's basement for a few decades until I found it while nosing around in the late 1980s. My dad took it home again, and I spent some time carefully cleaning it up for him and gingerly removing a light layer of surface rust until the original blue shone through again. He kept it hanging on the wall of his den in a house he lived in in Dearborn, Mi for years, and then he moved again a few years ago and the shotgun wound up back in a closet again. During all this time, it likely never saw an oil rag, and I'm going to need to go over it again. That's a lot of time put into an old single-shot that's worth maybe a $150 on a good day, but this one's my dad's, so it'll get as much work as it needs to make it shine like new again, and then it'll get a place of honor here in the Lair. 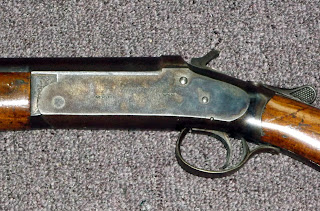 No more basements or closets for this one.

The second one is one that I bought him, also back in the late 1980s or early 1990s. Back then, he and I were going hunting a bit and shooting clays, so I bought him a used but sharp Ithaca Model 37 12 gauge pump, both so that he could have his own gun for these things and because I worried about him living where he did, just a few blocks from the Detroit border.

It originally came to me with the 18" riot barrel as it had been a sheriff's department gun before, but I found a modified-choke field barrel at a gun show and bought that for it too so that he'd have both a game barrel and a deer/defense barrel for the gun. The shotgun was parkerized and the barrel blue, but unless you look close, you can't tell the difference. This gun's serial number indicates that it was manufactured in 1968.

He and I never took it out more than a few times back in the day, but I did find out at his memorial service that he'd had it out clay shooting with a good friend of his from work recently. That made me smile to think of him still finding enjoyment in this gun so many years on. He seems to have mislaid the original short barrel that the gun came with, as I could not find it in the closet where it sat on a shelf next to the Iver Johnson. But that's ok. After a good cleaning, it'll go into my living room display rack next to my own much younger Ithaca pump and I'll look at them and remember the times that we went out with them together.

Also found in that closet was another old single-barrel 12 gauge that I did not recognize at first. Then I remembered. Back when I was going to clean up his Iver Johnson for the first time, I wanted to do it right, without ruining anything. So I went to a local gun shop that had a bunch of junk guns and bought this battered and rusty old single for $25 or so, then I used it for practice with various cleaning and rust-removal techniques until I was sure that I could work on the IJ without harming it. After I was done, I cold-blued it and oiled the stock, and my dad wanted it for display in his den so I gave it to him. I'd forgotten all about this one until we pulled it down off the shelf. First I thought that it was his old 16 gauge and I was shocked at how bad it looked, and then I saw that it was a 12 gauge and I eventually remembered what it was and how it'd gotten there. This one is a Newport Model WN, which was a trade name used for guns made for the Hibbard Spencer Bartlett Company of Chicago, a large sporting goods wholesaler of the day. Crescent Fire Arms Company of Norwich,CT made these for them from 1892 until 1931. It's in poor shape and long past having any value at all other than sentimental, but it'll go nicely on the mantle over the fireplace in my library. 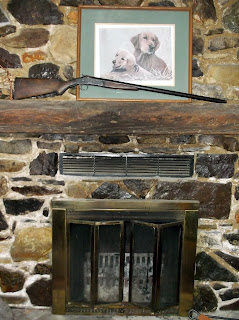 I didn't want your things, Pop. I'd have rather you just kept on having them forever. But life doesn't work that way. Rest assured that I'll take good care of them for you.