For a Brief Moment, I Had Hope For America...

But this afternoon, the Republican House re-elected John Boehner, Obama's favorite lickspittle, to run the House for the next two years, virtually ensuring that those of us who worked so hard to give the GOP control will be locked out of the process while Obama gets everything that he wants.

Ditto for the Senate, with Mitch McConnell back at the helm.

We, the People, took the keys away from the Democrats and gave them to the GOP because we wanted our country to go in a different direction and because we wanted Obama challenged and blocked. The GOP then handed those keys to the RINO establishment and just gave us the finger.

Good luck in 2016, guys. This time, you'll go for it without my help or support. I'm just going to sped my time and money looking for rural retirement property and buying enough ammunition to defend it, because the America that many of us grew up believing in is obviously gone and I want no part of the substitute in which taxes and regulations crush us while illegals swarm over everything that past generations worked to provide for us and us alone. If I'd wanted that crap, I'd have voted to keep the Dems in charge. But I voted for change, only to see nothing change at all. 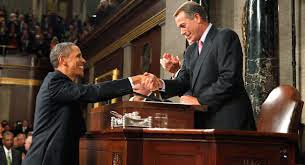