Long hard day yesterday. Lot if steep hill-climbing on foot, weighed down with pack, rifle and heavy armor plate because the Mexicans we were dealing with on the other side of the border fence are always armed. They have a whole network of little shacks on the south side where their spotter sit 24/7 to watch US Border Patrol and anyone else (us) and every time you glass them with binoculars, you can see them glassing you back and there's usually a long gun in plain view. I'd love to put up the pics but unfortunately they'd disclose exactly where we're at and even give a good idea where we're observing from.

And they're not just on the other side. It's routine here to find sign indicating that spotters or scouts have been setting up on high hills well inside the US, also to watch us and guide their drug loads through. They've even found them on the hills up above our stations, set up to look down into our housing and vehicle yards. And it's easy to tell where the Mexicans have been, be they scouts, mules or just illegals coming to steal jobs, because they throw their trash everywhere without a second thought for the "pristine wilderness area" that we're operating in. It's a cultural thing to just throw your trash on the ground apparently, and the south side of the fence looks like a huge landfill because of it. Fuck these people--they're pigs. But the pro-environmental left still wants them here for some reason.

Yesterday we saw some activity at the top of one of the hills along the fence so me and another guy climbed the hill, so steep that it took hands and feet to climb it, literally pulling ourselves up the fence in several sections. We got to the top and could still smell the cigarette smoke from the Mexicans who had been--or still were--on our side. Clearly they'd either heard us climbing or the spotters had tipped them off, but we didn't miss them by much. Suddenly the rifle didn't seem all that heavy. But we found some camouflaged holes in the fence and a radio antenna that they were in the process of setting up, probably to improve their communications down in the washes and valleys on our side.

Here's the view down the other side of the hill. That's a Border Patrol truck way down there. 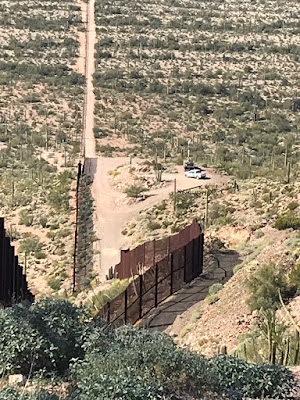 If we put something here, we could watch the fence line and surrounding area for miles in every direction. But environmental rules say we can't. I guess the Mexicans are exempt though, because they put this up here: 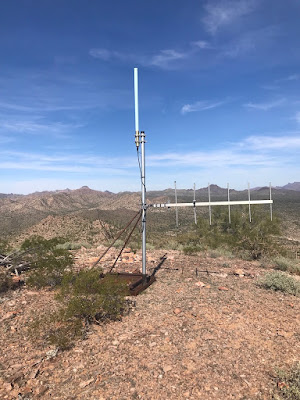 Any radio geeks know anything about this rig?

Lot of exercise yesterday. And I got spiked by another damned cholla cactus too. But let's see what today brings.