Seven years ago today, I got up bright and early and drove out to a dog pound in Ranson, West Virginia. I was there to give a mangy, dirty female German Shepherd a bath in a tub with a cold water hose.

Then after I signed a couple of papers, she was whisked off to a vet by the pound people and dropped off for pre-adoption medical work and a check-up. My cost at this time was $25 to the pound.

Then I went to pick her up from the vet a few hours later and was told that she had Heartworm and Lyme Disease and that the cost to treat both in addition to her other required work would run about a thousand dollars. I didn't really have a spare thousand dollars, especially when papered and pedigreed Shepherd pups were selling for about five hundred dollars. The vet said I could send her back to the pound and there'd be no cost to me other than the $25, but he also said that no one else was likely to spend that kind of money on a shelter dog and that the pound would probably euthanize her. So I sighed and wrote a check and later that day I drove home with the most expensive dog I'd ever bought, hoping that she'd get along with Murphy, who was already in the house. They'd done ok during a few pound play dates but I still had my reservations because Murphy was a jerk. But I did it.

Seven years later, I have no regrets at all. Belle turned out to be a wonderful dog who put Murphy right in his place and tempered his separation anxiety when I was gone. I also discovered that this ragamuffin dog who'd been ditched at the pound by some hillbilly had been at one time professionally obedience trained and she already knew how to do everything I wanted her to do--sit, down, stay, heel. Loyal, obedient and chock full of love, she was a real find and looking back, that thousand dollars was one of the best investments I've ever made. 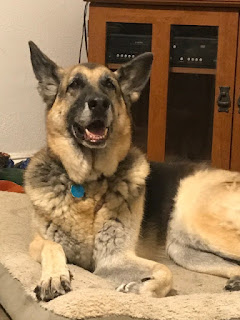