Today I got in my first new ammo shipment in almost a year. Prices and supply have been stupid as we all know thanks to Democrats and the things they’ve been doing and supporting but I’d been reading about this round and de used to give it a try if I found some at a reasonable price. Well today’s “reasonable” isn’t what it used to be but I managed to find a few boxes at about forty-five cents a round (who’d have thought we’d see the day so soon?) and in the interest of testing it out I bought them. 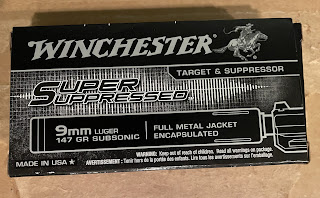 As it turns out, I was not disappointed

I wanted a good suppressed round for my Uzi with the Mossad II suppressor, who h so far had not impressed me a lick even with my own 147gr reloads. It was still only arguably hearing safe with anything I’d tried and even at best it was clearly audible at quite a distance. Although it sounded more like a roof stapler than a gun. I was regretting buying the can even though I’d picked it up used for a song even after the transfer. I was used to rifle suppressors muffling shots somewhat but I’d wanted more from the pistol-caliber Uzi and I felt like I’d wasted my time and money.  But this test tonight changed everything.

Shooting just for sound and function, I fired the first round with hearing protection in place just to be safe. The bolt slammed home on the first round and had I not seen the slightest flash at the muzzle and felt the action cycle I’d have thought it misfired. WTF?! That wasn’t possible. Was it? I took the err pro off and fired another round. Then two more. The reports were barely louder than the sound of the action cycling. Now THIS…this was what I’d always wanted from a suppressor.  I fired a few more, then pushed the selector into “hose ‘em down” mode and ran the mag out. If I’d had someone there to talk to we could have conversed over the minor noise this thing was making. Incredible. 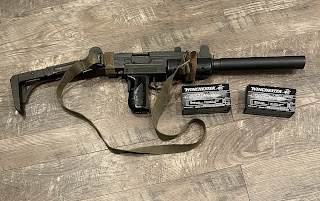 I’m not mad about 0.45 a round any more. Not for that sort of performance. Nice job, Winchester!
Posted by Murphy's Law at 11:23 PM