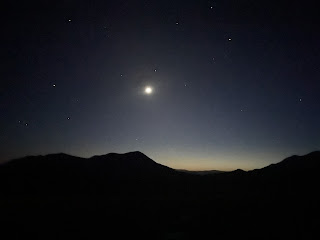 I’ve seen them before, closer to town. I know they’re out here. But last night I heard the coyotes barking to each other close by. I couldn’t see them in the dark but I knew they were in my valley last night. Several of them. The dogs heard them too. Merida seemed curious at first but I think she picked up on the concern in my voice when I summoned her sharply and she made a bee-line for the trailer and leapt inside. Murphy was another matter.

In his day I have no doubt that Murphy could have bested a coyote, probably even a pair of them. But this isn’t his day any more and he’s old and arthritic. And there was more than two of them out there  judging by the barking. Still, Murphy stood, like Horatius of old, staring down into the valley, ears back, hackles up, and letting out a long low growl as if he was ready to defend his home, his sister and me. It was all I could do to get that aged but magnificent warrior dog back to me and the safety of the trailer. His spirit was ready, of that I had no doubt. He knew they were a threat but he was game.

And now the dogs stay in the trailer from duck until dawn, unless I’m out there with them standing overwatch with a flashlight and my Ted Stevens model Winchester 94 from Sears and Roebuck

They were out there again tonight too, if anything even closer. I have no doubt that they know we’re here. Tonight I sat outside in the dark, beer in hand and the Winchester across my lap, and I listened to them. Primal. Awesome.  And this is their home, so I bear them no ill will. I just hope that they keep their distance for another week and a half, and if they do we’ll be gone, leaving this bit of desert to them. 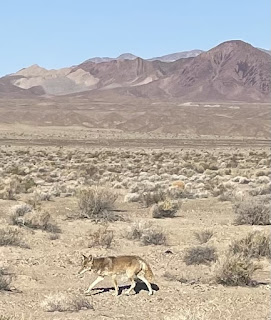