What a week...Drinking, shooting, WALKING!!!

All right. Back again. I apologize for the lack of updates this week to both this site and The Shekel, but Aaron, creator of The Shekel was here visiting all week and neither of us managed any site updates. But I dropped him at Dulles International Airport a while ago and as I write this, he's on his way to Toronto where he's undoubtedly going to catch hell for missing the flight that he was supposed to have been on. That's my fault though. If I hadn't insisted that we bring those two strippers back here last night we'd have been able to get up on time to allow him to catch that flight.

Uh, if Aaron's lovely and understanding wife Natasha should actually read this, I'm kidding about those strippers. We did not bring them home. Uh... I mean we didn't even go see any, Tash. Honest. Two nice guys like us would never even consider such a thing.

What we did do, however, was knock out a lot of pre-winter projects that I had lined up here. We stripped and painted my last deck, did some heavy grocery shopping, and got lots of other things done that I quite frankly needed a bit of help with.

We also went to the gym every day to work out, (Hooray! I finally found someone younger than 60 who is in worse shape than me!) we shot a couple of times, we visited a few Civil War battlefields, and we drank lots of beer and watched a lot of violent movies, critiquing the weapons-handing, military tactics and any legal arguing in all of them. In other words, we just did the guy thing for a week. (Except for the strippers, Tash. Honest...)


But the best news of the week was that I actually started WALKING again without crutches! Serious Yay for me!!

Let's deal with the walking first.

I got the new foot last Friday, but it was very rigid and heavy, and my leg wasn't terribly keen on my putting my full weight on it. I had to continue to use my crutches with it, but I was still grateful because I could move a lot faster and easier than without it and it was another step on the long road back.

Saturday was no big deal--I used it to get to the airport to pick Aaron up. Sunday we went out for breakfast, and as I stood up to pay, I was struck with a massive lower leg cramp in that leg. (Just imagine the worst Charley Horse that you've ever had...) And since I could not just stretch the foot and make it go away, I had to just grit my teeth and ride it out. Two more hit me at church that morning, but I still insisted on going to the gym. There, as I worked through my exercise regimen, they started up again and grew so severe that I had to quit and remove the foot immediately. And Monday I couldn't even get the foot back on due to the swelling. But my prostetist suggested that this might be caused by muscle strain due to the foot pulling at the leg muscles while I'm seated and he recommended that when I sit down, I should try releasing the foot's locking mechanism to take the tension off. I began following that advise Tuesday and I haven't had any further problems with it.

But Wednesday... That was Walking Day! Neither my prostetist nor I expected me to be walking on this temporary foot, but as Aaron and I were leaving the gym Wednesday, I decided to show off for the physical therapists there by holding my crutches off the ground and taking a couple of unsupported steps. As I lurched forward and took a step, something just clicked and two steps became three, and it didn't hurt. Three steps became four, then five, and not wanting to stop, I kept moving forward in a straight line right on out the door for another thirty feet until I reached my Jeep, where the leg finally gave out. Damn! First time on two feet since August 3rd. No one was more surprised than me. Thanks, God!

Thursday was even better. We went to Gettysburg National Military Park and I tried some more walking. I hobbled around a bit, with a gait resembling that of Frankenstein's monster, but it was good. And then I saw the tower. 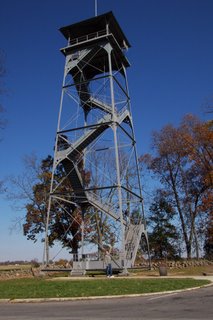 It was an observation tower intended to let people see the panorama of the battlefield, and I just knew that I had to climb it. I looked at that tower and knew that it was going to be a tough one, but I couldn't just drive on and not do it. Leaving my crutches behind, I headed for the stairs with aron close behind, telling me not to overdo it. Yeah, like I've ever listened before when anyone's given me that good advice...
Using both rails, I took it one step at a time. Up, up, up we went. Slowly and with great exertion as the new foot not only doesn't have any muscles to help, but it's heavy and has to be lifted by the other leg. That tower has 121 steps and I'm proud to report that I made it all the way to the top, dripping with sweat and puffing like a vintage steam train. And Damn, it felt good!

I did one more strenuous walk a bit later, walking up the fairly steep and uneven trail that led to the Little Round Top position. This gave me a chance to try walking on soft earth, grass and rocks as well as asphalt. I also learned that it's easier with this foot to walk UP hills than to walk down them. And I was pretty much spent after those two short walks. It's definitely going to be a long walk back to where I was before, but I overcame these challenges and there's nothing going to stop me from going the rest of the way.