Nothing beats time spent with good folks amidst tanks and other fighting vehicles, so this morning's Old NFO-arranged outing to the American Wartime Museum at the Tank Farm in Nokesville, VA with Suzy and Al (and Stretch, whom I missed) made for a great day indeed.

This really cool M-36 Tank Destroyer, recently back from Bosnia 15 years after our government gave it away to those nice, stable Yugoslavians, met us at the entrance. 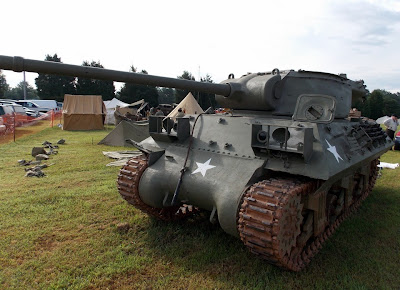 I'd love to have one of these, with or without a functional 90mm main gun. 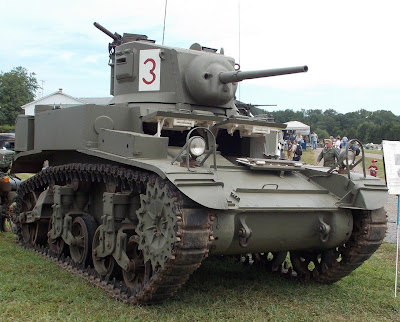 This one should not be confused with the M3 Lee medium tank, 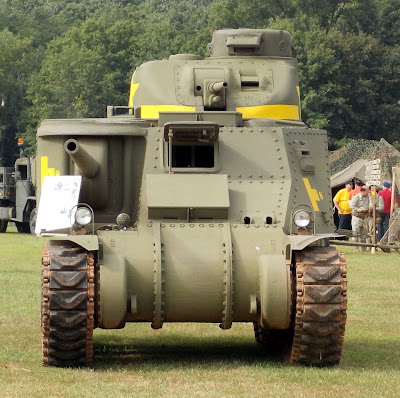 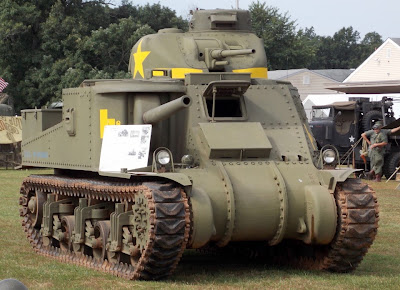 or the British export version known as the M3 Grant, 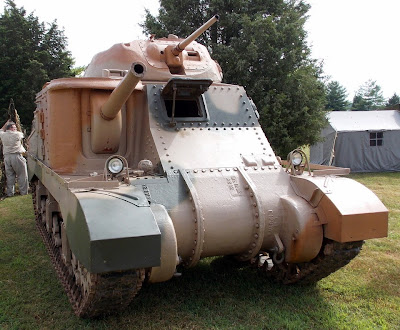 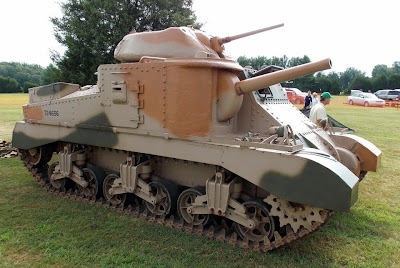 or the upgraded Stuart, known as an M5 Stuart light tank 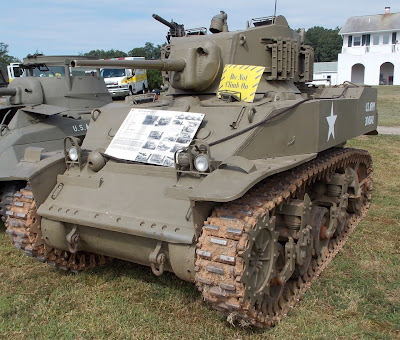 Confused yet? Let's just stick to this one for now:

A classic and a favorite of any armor buff--the venerable M4 Sherman medium tank. 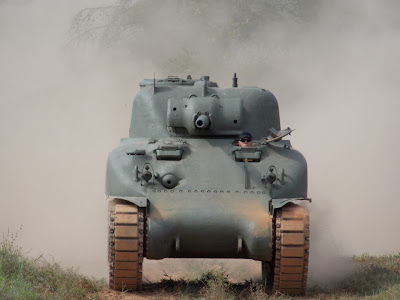 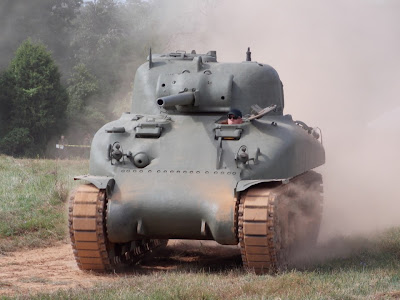 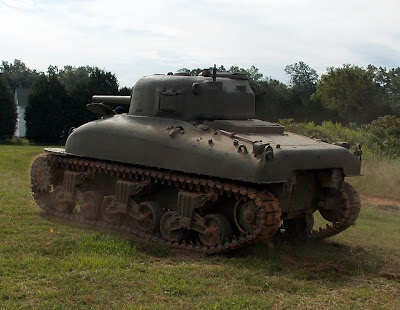 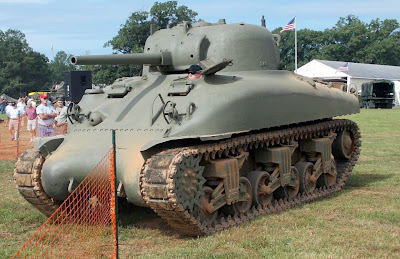 Here's a later version with a welded hull as opposed to the case hull of the one above. 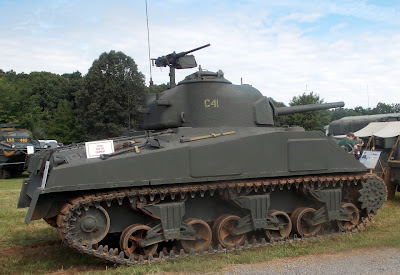 Over 50,000 of these were made for World War Two. With so many having been manufactured, somehow it just seems wrong that I do not have one today? Could no one set even one aside for me? Geez...

Oh, and here's that cast-hull job in action.


There were half-tracks there, too. 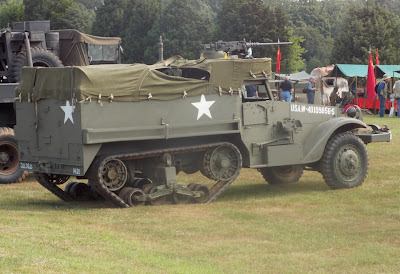 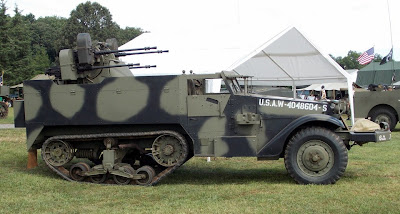 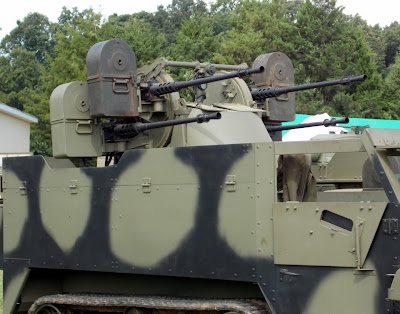 And the half-track's wheeled cousin, the White Scout Car. 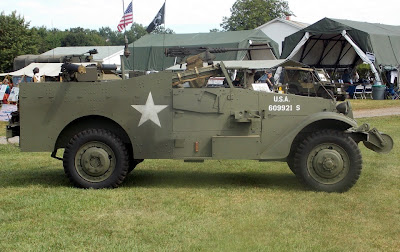 There was even a Ferret armored scout car that caught my fancy. 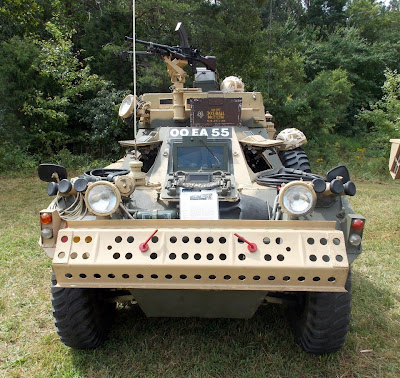 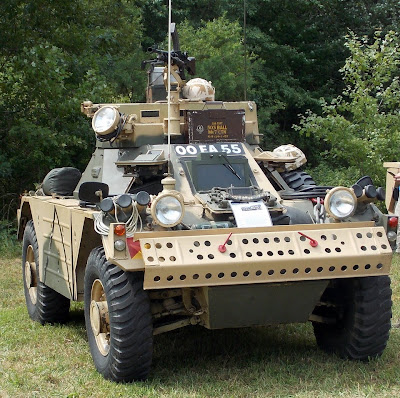 Old NFO did nothing to dissuade me from shopping for one. If I buy one, it's Old NFO's fault.

And here's a really nice British Chieftain Main Battle Tank. (These are still common and relatively affordable, too!) 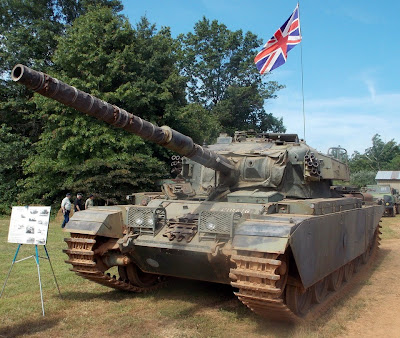 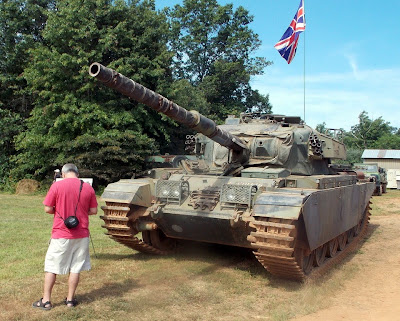 The guy in the red shirt is what's known as an "obliviot" (an idiot who is oblivious to everything around him.)
Notice that he's paying no attention to the tank. He's just fiddling with his camera. He stood there for over two minutes doing so, and no one could get any photos without him front and center in them. He was just in his own world and screw everyone else who might want to take photos. (Usually you find these people at airshows in large numbers, all standing right next to the planes for no reason other than to prevent or ruin photographs. I think tat some evil entity buses them in to such events.)

I had to duck this guy or wait him out several times during the morning as he did stuff like this right up close and personal with numerous over vehicles. It's like he was the self-delegated blocker of pictures. I SO would ave liked to have volunteered him for the upcoming flamethrower demonstration as a target.

Oh look--an intergalactic celebrity must have arrived; I think I see the TARDIS behind the Chieftain. 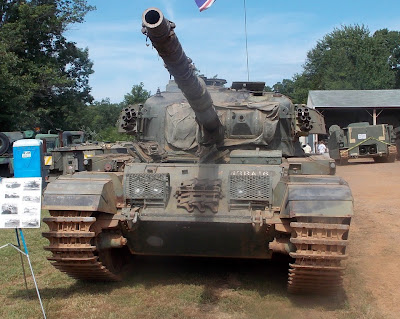 And about that flamethrower...

This cool tool exists because someone back during the Second World War thought: "You know, I would like to set that guy on fire, but I don't want to have to walk all the way over there to do it." And necessity IS the mother of invention. Now where's that red shirt guy?

More later. Too much coolness at once and you can go into diabetic tank coma.
Posted by Murphy's Law at 6:55 PM